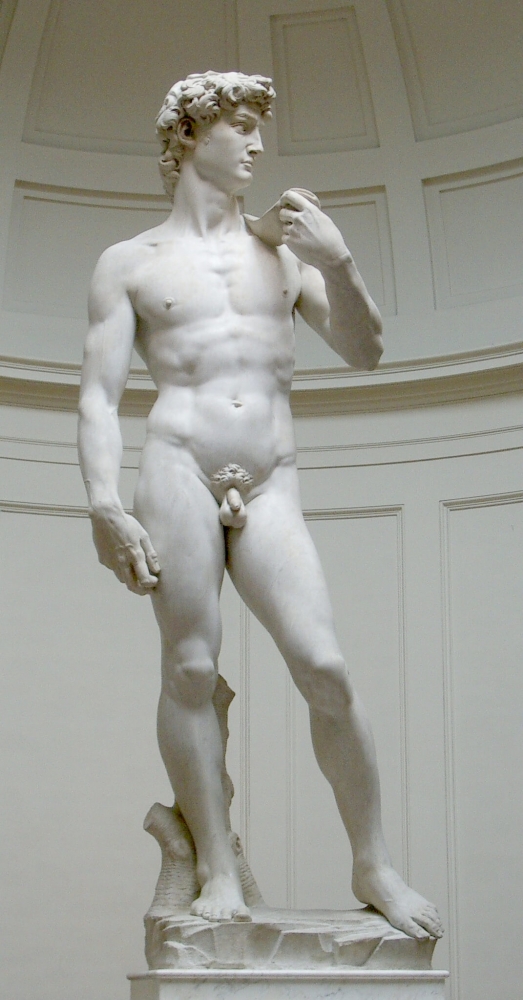 David is one of Michelangelo’s most-recognizable works, and has become one of the most recognizable statues in the entire world of art.  Standing 13’5″ tall, the double life-sized David is depicted patiently waiting for battle, prepped with slingshot in one hand and stone in the other.  The twentysomething-Michelangelo carved the David after he had already carved the Pieta in Rome in the late 1490s and returned to Florence in 1501.  Knowledge of his talent as a sculptor, therefore, was growing, and his career was accelerating when he was commissioned to carve the biblical David for the outside of the Florence Cathedral.  Because the statue was intended to be placed in a high location on the church, it had to be large enough to be seen from below.  Today, it resides not outside the cathedral, but inside the comfortable confines of the Accademia Museum in Florence.

The marble block used by Michelangelo was originally excavated for a statue to be carved by another sculptor in 1464, but the block was not fully carved.  When Michelangelo received his commission in 1501, he was presented with the challenge of using the block which had already been worked upon to some degree.  He had to work with what he was given, and in this case it meant that the figure he carved would not project outward beyond the preset block of marble.

The David we are presented with here is a nude man with a very muscular physique.  His veins are visible in his arms and hands as he clutches the stones with one hand and the slingshot in the other.  His hands and his head appear to be disproportionally large for his body, possibly because they were deemed more visually important for viewers who would see the statue high up on the exterior of the cathedral.  Also, his left leg, which straddles the rocky base upon which he stands, appears a big too long for his body.  It accentuates the line of this leg as it forms an essential component in David’s contrapposto stance.  Like the ancient Hellenistic and Roman sculptures who were masters at convincingly depicting the human anatomy, Michelangelo has depicted David so that his body responds to the stance he is in.  David’s weight has been placed on his right leg while his left leg is at rest.  Because of this, his hips have shifted with one side being higher than the other.  In turn, this has caused David’s spine and midsection to curve slightly, and his right shoulder drops slightly below his left one. Compared to Donatello’s bronze David, also created in Florence – though a half century earlier – we see several tantalizing similarities and differences.  Both are heroic nudes standing in contrapposto, though Donatello dressed his figure in boots and a hat.  Unlike the semi-effeminate boy that Donatello created, Michelangelo presented David as a strong and assured man stripped of all the other objects associated with the biblical narrative, such as the head of Goliath or the sword.  Instead, David stands alone with only his slingshot and stones almost hidden on his person.  Scale is also an important consideration, since Donatello’s David is less than half the height of Michelangelo’s.  In fact, Michelangelo presents us with David in giant form, which is ironic since his enemy is a giant.  The colossal size is significant because it was the first time that a large scale nude statue was made in the Renaissance since antiquity.  But perhaps even more striking is the timing in the narrative at which we are seeing David as depicted by Donatello and Michelangelo.  The earlier sculptor shows us David after the fight has already occurred and after he is victorious in battle.  Not so with the latter.  Instead, Michelangelo shows us David before he is engaged in battle, and before victory has been attained.  This anticipation of action is manifested in the face of Michelangelo’s David, which conveys intense concentration and a furrowed brow as he stares into the distance.  This is a figure who is focused on the future rather than one who is contemplating the past.

Detail of the face of Michelangelo’s David.

After it was completed, Michelangelo’s David became a civic symbol for Florence, even though it was ultimately a religious sculpture.  The early 1500s was a time of turbulence between the city and its former ruling family, the Medici.  Now, the Medici were seen as aggressors or tyrants and had been kicked out of Florence.  Florentines adopted the David as a symbol of their own struggle against the Medici, and in 1504 they decided that Michelangelo’s creation was too good to place high up on the cathedral.  Instead, they put it in a much more accessible place near the Palazzo della Signoria, the main square of the city.