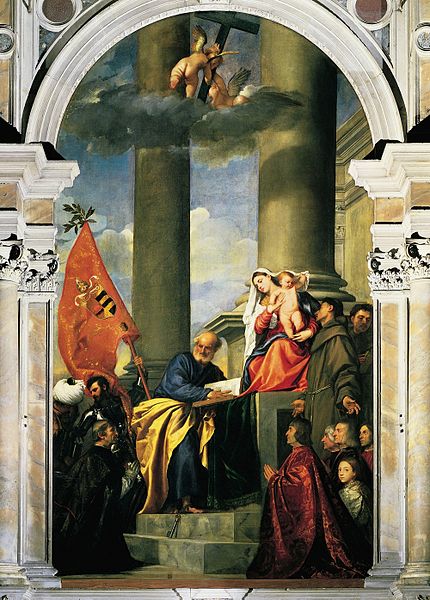 Titian’s great altarpiece depicting the Virgin and Child is located in the church of Santa Maria Gloriosa dei Frari (otherwise known simply as the Frari) in Venice.  The painting shows both of these figures near the top of a stepped platform; the Virgin wears a beautifully-colored red robe covered with a blue garment and a white mantle, under which the Christ Child playfully appears.  The Virgin looks down to the figures on the left side of the canvas, while Christ looks to the right side.  Before discussing these various figures, it is important to take note of the monumental architecture in which they appear.  We see the bottoms of two enormous columns, which appear to form part of a gateway or portico preceding a large, classical structure only partially visible to the right.  This use of grand, classical architecture echoes the same practice being done by artists such as Raphael in his great fresco at the Vatican, the School of Athens. 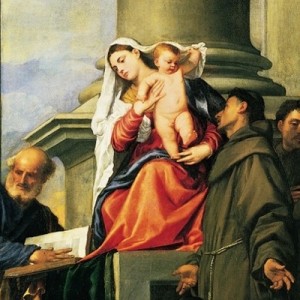 Since the church of the Frari is operated by the Franciscan order, Titian has placed the order’s patron, St. Francis of Assisi, in a prominent spot in the painting next to the Christ Child.  St. Francis is identifiable not only by the brown cassock which is typically worn by Franciscans, but also by his tonsured head and the presence of the stigmata on his hands.  Below St. Francis, several members of the Pesaro family kneel in adoration.  It is not unusual for Italian painters of this period to include members of the family that commissioned the work, and here we see what appears to be several generations of family members.

On the left side of the Virgin and Child we see a prominent figure dressed in a blue robe, with a marvelous yellow garment draped over him.  This is the important apostle of Christ, St. Peter, who is identifiable because of the key which is attached to his ankle.  With one hand in the book, Peter looks to the bottom left at another figural grouping. 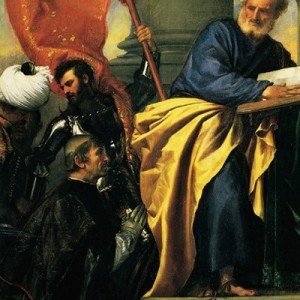 The group to the left of Peter includes Jacopo Pesaro, a military leader who led forces that defeated a Turkish force, as well as a man wearing a turban who is meant to symbolize the Turks.  The message here is that Pesaro is bringing the Turk to Christianity (i.e. the Virgin and Child) and to the Catholic Church (symbolized by St. Peter).

Titian made several strides in the history of art in the Pesaro Madonna.  In its composition, it is different than the traditional Virgin and Child altarpieces which were produced in Italy before this time.  The figures are not in the center, but are off-center, and they appear to be at the apex of a scalene triangle rather than a balanced isosceles triangle.  The perspective is also off-center.  If we follow the orthogonal lines of the steps, we can see how they would intersect at a vanishing point to the left of the canvas.  This is quite different from other earlier Renaissance works, such as Masaccio’s Tribute Money or Leonardo’s Last Supper, in which the vanishing point lies at the center of the painting in an area of primary visual importance.

The effect of Titian’s design decisions may make it seem as if the viewer, walking into the church of the Frari and seeing the Pesaro Madonna above a side altar to his left, could “walk” up and into the painting; in other words, the angle at which we see the painting corresponded with the direction from which visitors to the church came.  Overall, this painting shows that while Titian does not have a name as famous as those of some of his contemporaries, he similarly combined both innovation and technical skill to continually push forward the world of art.

The Altarpiece in Renaissance Venice

The Discovery of Pictorial Composition: Theories of Visual Order in Painting, 1400-1800