Michelangelo carved a number of works in Florence during his time with the Medici, but in the 1490s he left Florence and briefly went to Venice, Bologna, and then to Rome, where he lived from 1496-1501.  In 1497, a cardinal named Jean de Billheres commissioned Michelangelo to create a work of sculpture to go into a side chapel at Old St. Peter’s Basilica in Rome.  The resulting work – the Pieta – would be so successful that it helped launch Michelangelo’s career unlike any previous work he had done.

Michelangelo claimed that the block of Carrara marble he used to work on this was the most “perfect” block he ever used, and he would go on to polish and refine this work more than any other statue he created.

The scene of the Pieta shows the Virgin Mary holding the dead body of Christ after his crucifixion, death, and removal from the cross, but before he was placed in the tomb.  This is one of the key events from the life of the Virgin, known as the Seven Sorrows of Mary, which were the subject of Catholic devotional prayers.  The subject matter was one which would have probably been known by many people, but in the late fifteenth century it was depicted in artworks more commonly in France and Germany than in Italy.

This was a special work of art even in the Renaissance because at the time, multi-figured sculptures were rare.  These two figures are carved so as to appear in a unified composition which forms the shape of a pyramid, something that other Renaissance artists (e.g. Leonardo) also favored.

An examination of each figure reveals that their proportions are not entirely natural in relation to the other.  Although their heads are proportional,

the Virgin’s body is larger than Christ’s body.  She appears so large that if she stood up, she would likely tower over her son.  The reason Michelangelo did this was probably because it was necessary so that the Virgin could support her son on her lap; had her body been smaller, it might have been very difficult or awkward for her to have held an adult male as gracefully as she does.  To assist in this matter, Michelangelo has amassed the garments on her lap into a sea of folded drapery to make her look larger.  While this drapery serves this practical purpose, it also allowed Michelangelo to display his virtuosity and superb technique when using a drill to cut deeply into the marble.  After his work on the marble was complete, the marble looked less like stone and more like actual cloth because of its multiplicity of natural-looking folds, curves, and deep recesses. 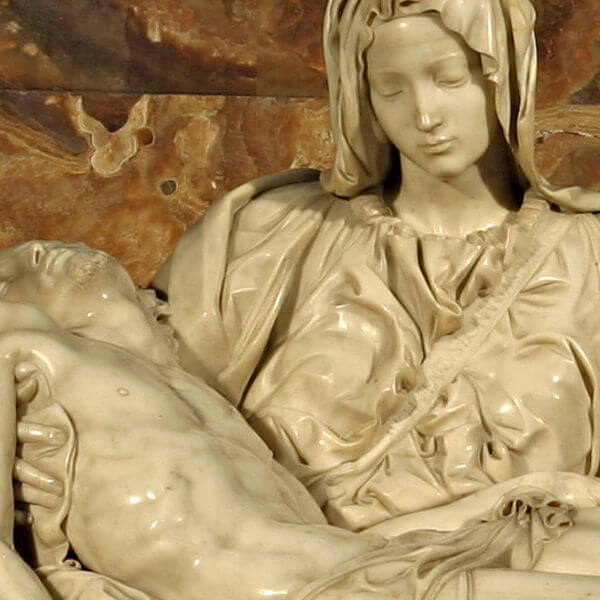 Around the time the work was finished, there was a complaint against Michelangelo because of the way he depicted the Virgin.  She appears rather young – so young, in fact, that she could scarcely be the mother of a thirty-three-year-old son.  Michelangelo’s answer to this criticism was simply that women who are chaste retain their beauty longer, which meant that the Virgin would not have aged like other women usually do.

Another noteworthy incident after the carving was complete involves the inscription on the diagonal band running over the Virgin’s torso.  Vasari tells us about the reason for this inscription in one of his passages about the life of Michelangelo:

Here is perfect sweetness in the expression of the head, harmony in the joints and attachments of the arms, legs, and trunk, and the pulses and veins so wrought, that in truth Wonder herself must marvel that the hand of a craftsman should have been able to execute so divinely and so perfectly, in so short a time, a work so admirable; and it is certainly a miracle that a stone without any shape at the beginning should ever have been reduced to such perfection as Nature is scarcely able to create in the flesh. Such were Michelagnolo’s love and zeal together in this work, that he left his name a thing that he never did again in any other work written across a girdle that encircles the bosom of Our Lady. And the reason was that one day Michelagnolo, entering the place where it was set up, found there a great number of strangers from Lombardy, who were praising it highly, and one of them asked one of the others who had done it, and he answered, “Our Gobbo from Milan.” Michelagnolo stood silent, but thought it something strange that his labors should be attributed to another; and one night he shut himself in there, and, having brought a little light and his chisels, carved his name upon it.
Vasari’s Lives of the Artists

This was the only work of Michelangelo to which he signed his name.

The Pieta became famous right after it was carved.  Other artists started looking at it because of its greatness, and Michelangelo’s fame spread.  Since the artist lived another six decades after carving the Pieta, he witnessed the reception of the work by generations of artists and patrons through much of the sixteenth century.

In more modern times, the Pieta has experienced some colorful events.  In 1964, it was lent to the New York World’s Fair; afterwards, Pope Paul VI said it wouldn’t be lent out again and would remain at the Vatican.  In 1972, a Hungarian-born man (later found to be mentally disturbed) rushed the statue with a hammer and started hitting it, including the left arm of the Virgin, which came off, and her head, breaking her nose and some of her left eye.  Today, you can visit the statue in New St. Peter’s Basilica in Rome.

Michelangelo and the Reinvention of the Human Body, by James Hall