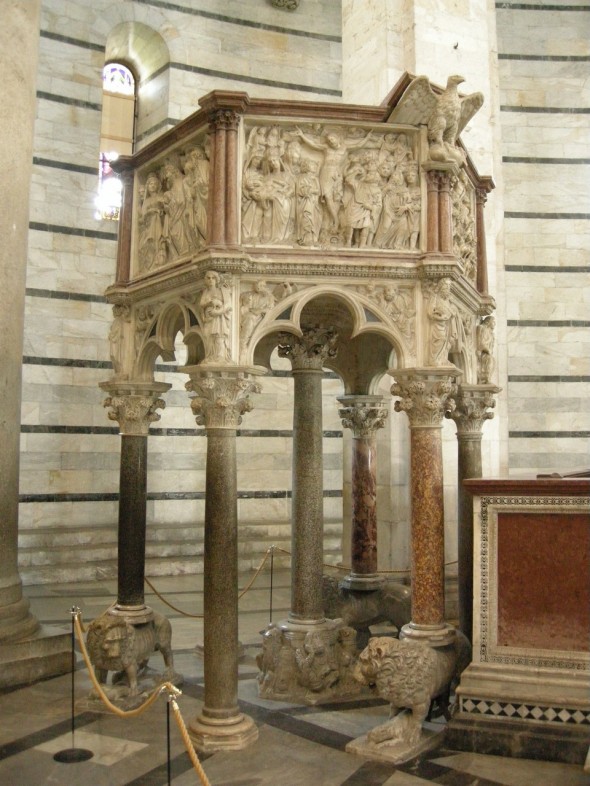 Changes in styles or movements in the history of art are often the result of gradual phenomena, so the creation of new works which signal sudden changes are particularly significant. One such work which art historians point to as signaling a turning point in Western sculpture is the pulpit for the Pisa baptistery, created by Nicola Pisano from 1259-1261. The pulpit contains the first sculpted reliefs of its kind and is a work that is considered to mark the beginning of an entirely new phase within the history of art. It is the incipient work of the proto-Renaissance, one which foreshadowed the great works of Italian Renaissance of the fifteenth and sixteenth centuries. Despite this association of the pulpit with Renaissance sculpture, it was completed contemporaneously with works that fell stylistically within the timeframe of Gothic art, which by the mid-thirteenth century had spread well beyond its origin of the Île-de-France. 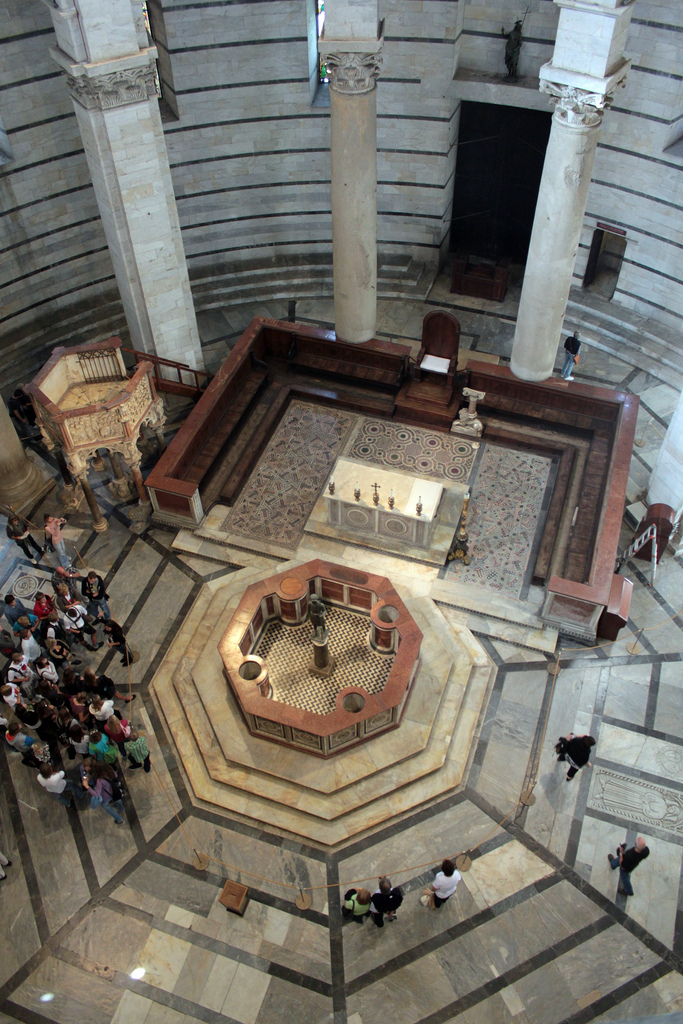 The baptistery pulpit is located on the south side of the building. In this photo, it is to the left of the baptismal font.
Photo by Fr James Bradley (cc) 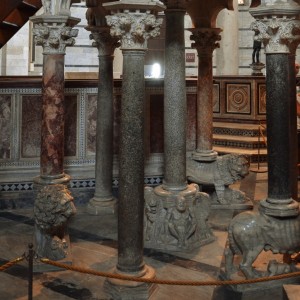 Lions circling crouching humans at the base of the pulpit.
Photo

Nicola’s pulpit is presently located in the Pisa baptistery on the southern side of the building, or to the left of the font, though originally it was probably located to the right of the font (see photo). The pulpit takes the shape of a hexagon elevated on seven columns, six of which form a ring around its outer portion while one stands in the center. At the base of three of these columns are sculpted lions which look inward at the base of the middle column, on which sculpted figures are huddled low in crouching positions. These figures have been interpreted in different ways by scholars; one interpretation holds that they represent the pagan forces that are controlled by Christianity, while at the base of three of the outer columns are lions ravishing their prey. Alternatively, the middle figures have been interpreted as Old Testament figures (Noah, Daniel, and Job) who represent the pre-Christian world, and the lions have been seen to represent Virtues on account of their nurturing natures. In either case, it is clear that the pulpit’s iconographic program has been imbued with Christian ideals which frame the way in which the structure was meant to be viewed by the public.

The free-standing design and hexagonal shape of the pulpit make it structurally distinctive compared to the majority of pulpits that preceded it. In Tuscany, pulpits tended to be rectangular prior to this time, although some polygonal pulpits did appear in minor churches in nearby Italian regions. Two examples of traditional pulpit design can be seen at San Miniato al Monte in Florence from 1207, and at San Cristoforo in Barga from the mid-thirteenth century.  According to one scholar, the reason for the hexagonal shape of the Pisa baptistery pulpit was due to the peculiar plan of the building, which was a round baptistery rather than a basilica with flat walls. Nicola would have recognized the lower level of compatibility of a rectangular pulpit situated near an octagonal baptismal font, both of which were in a centralized space. Thus, it was simple artistic convention affected by the associated circumstances of the architectural surroundings which at least partially influenced the basic structure of Nicola’s pulpit.

At the top of the columns of the Pisa baptistery pulpit are capitals adorned with prominent acanthus leaves, indicating a variation on the classical Corinthian order. Resting on top of the outer ring of columns are rounded arches and a carved trilobe pattern attached to their soffits. The place where the pulpit rests on top of the columns is decorated with sculpted virtue figures over the capitals and prophets in the adjacent spandrels. Virtually every inch of the spandrels and corners above the capitals are adorned with sculpted reliefs.

While the configuration of the pulpit introduced some new features to thirteenth-century sculpture, Nicola made even greater strides forward in his narrative panels and sculpted figures on the pulpit. The scenes on the panels depict the Nativity, the Adoration of the Magi, the Presentation in the Temple, the Crucifixion, and the Last Judgment. Thematically, these scenes relate to the idea of Christian Redemption, beginning with the creation of Christ’s earthly reign. In presenting this, his focus was on the human figure, and each of the panels recalls the classical past. 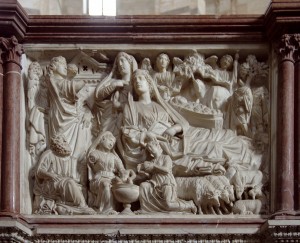 These first two panel narrative scenes, the Nativity and the Adoration of the Magi, were typical pulpit scenes in Tuscany but here Nicola gave them a natural feel which was novel for the time. In the former, he based his image of Mary on a form from Etruscan tomb sculpture and in the latter he borrowed from a sarcophagus image of the Phaedra to depict her. The folds in the garments of the Adoration Virgin become thick, and he even drew from a Greek precedent to depict one of the men in this scene. Also in the Adoration, Nicola depicted the Christ Child not in an iconic way but as a chubby baby who reaches out for the gifts of the Magi. The horses in the scene are also depicted naturally, with pair to the top having flared nostrils and enlarged veins as if they had just come to a stop. Nicola carved the facial hair and coiffures of the kings in classical form while their drapery does not hide their moving bodies.

In the panel of the Presentation in the Temple, Nicola shows the account from Luke 2 in which Mary and Joseph take the Christ Child to the temple for his circumcision according to the law of Moses (Figure 8). Here, the main characters of the story are situated most conspicuously: Joseph carrying the pair of doves, Mary, and Simeon with the Christ Child in his arms. To the right of Simeon is Anna the prophetess with a scroll in her hand. Of uncertain identity is the man to her right, whose left arms is held up by a boy. It has been suggested that this man is either Simeon represented again, or an allusion to Mary’s Purification. 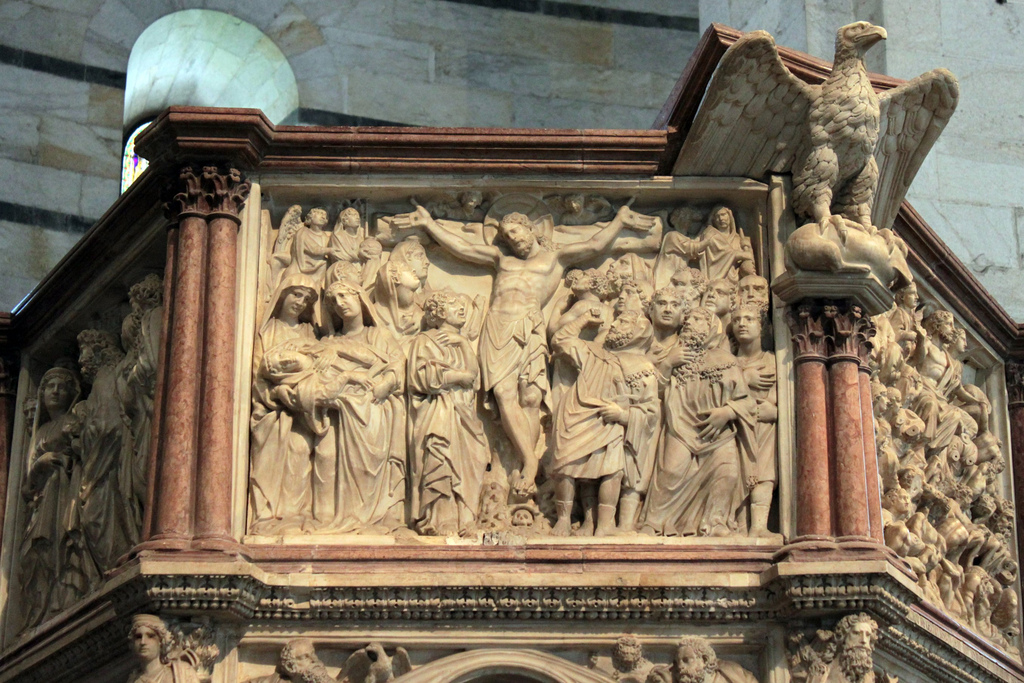 The Crucifixion scene depicts more classically-inspired figures within an interesting iconographic scheme. Christ is nailed to a cross made of tree limbs rather than posts, something which points to the idea of the Tree of Life and the future rather than the current victory of Jesus which was more typical. Three nails go through his body, rather than four, which alludes to the Trinity. While this had been done before in other parts of Europe, it was unique to Italy. Also, the figure of the Virgin, as she falls into the arms of the other women under the weight of much grief, adds something new to the iconography of this scene.

One of the more interesting changes, and a departure from many Gothic depictions, is Nicola’s composition of the Last Judgment scene (Figure 10). The scene depicts Christ with the good souls on one side and the bad on the other, but in this particular depiction the two sides are given a disproportionate amount of space. Here, it is the good who have benefited, as they received a greater portion of the scene, a feature which is atypical in Last Judgment imagery. It has been suggested that this thematic alteration may be due to a new-found sense of mercy that Christ extends to mankind, echoed by the placement of Mary at the right hand of Christ. At the same time, included in this scene is an image of hell, which may serve to even out the disparity because of the sizable area given to the good. 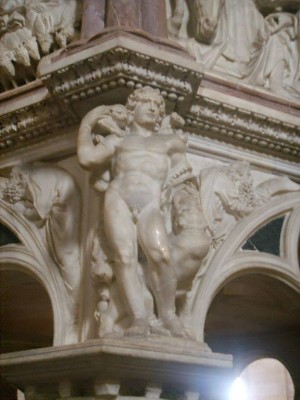 Apart from the narrative panels, the sculpted figures standing on top of the column capitals stand prominently in view and carry on the use of antique forms in the pulpit. While the exact source of Fortitude, depicted in contrapposto stance, is unclear, it is evident that this is nevertheless classically-inspired and constitutes a new use of the nude figure, since nudity had previously been reserved for use in specific situations such as the Last Judgment and the Book of Genesis. Whereas Fortitude had traditionally been depicted through accessories, here Nicola depicted the virtue through a Herculean bodily form.

Aside from the anthropomorphic carvings, there are several other notable sculpted items on the pulpit. Each relief is set in a frame of red marble and separated from one another horizontally by groups of colonnettes. The grouping of three colonettes that separate the panels of the pulpit are French in origin, a motif that Nicola may have taken from his time in Apulia. Of these colonnette groupings, one of them differs because of the insertion of the desk into this place. The desk, which consists of an angled surface on a vertical structure, is typical of Italian pulpits and is normally supported by the outstretched wings of a sculpted eagle. The eagle, which is the symbol of St. John the Evangelist, was normally depicted along with the symbols of the other Gospel writers in close arrangement on the vertical support; however, in the Pisa baptistery pulpit, Nicola omitted these other symbols and instead left the eagle alone, grasping a critter in its talons.

Considering the pulpit as a whole, already it is possible to see several advancements made in Nicola’s approach to his work, such as the aforementioned freestanding nature and shape of the pulpit. But it is truly when this was combined with the sculptural program that we can consider it as being a truly groundbreaking work. The pulpit contrasts with some other pulpits in the region, such as the pulpit in San Giovanni Fuorcivitas in Pistoia, where Fra Guglielmo also copied sarcophagus sculpture but did so in a way that Pope-Hennessy says utilized a lesser degree of undercutting and achieved a more elementary expressive impact. Also, it contrasts with the pulpit at San Leonardo in Arcetri, whose reliefs show garments that do not respond to the contours of the body but instead merely fall in lines to convey shape.

The narrative reliefs also provide us with the traditional explanation for the break between what is considered “Gothic” on one hand, and “proto-Renaissance” on the other. Typical of Tuscan art, the narratives are heavily populated with figures, but here their bodies are fully depicted, similar to the way figures were represented in Roman sarcophagi. The bodily features of the figures on the reliefs are thick, and their many garments fall in a way that indicates the parts of their bodies underneath. While Nicola was not the first artist to take from classical sources in sculpture, he did so in a more complete and comprehensive way unlike that of his predecessors. Tuscan sculptors would sometimes use ancient ideas in their sculpture, but in a sporadic way. They did not use it in a comprehensive manner, at least until Nicola started doing so. Nicola’s intention was not to use classical sculptural ideas to supplement what was already existing in thirteenth century sculpture, but to come up with an entirely new style for the age, though one which was based on the past.