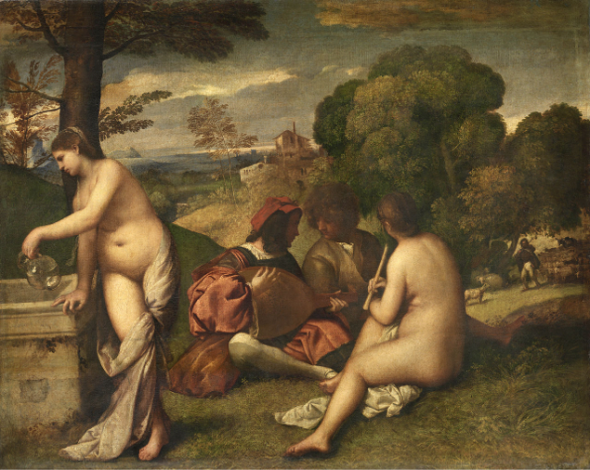 The great painting in the Louvre entitled the Pastoral Concert (also the Pastoral Symphony and the Fête champêtre) is mysterious both in meaning and in authorship, but it has been one of the more influential paintings in the museum, particularly on nineteenth-century painters who came to Paris to see it.  It has been attributed to the greatest of Venetian painters, Titian, as well as to one of his teachers in Venice, Giorgione (it was first attributed to Giorgione in 1671).  Scholars have gone back and forth over the years in their opinions about which artist painted the scene, but recently the tide has favored Titian as the hand responsible for the work at a rather early point in his career (Titian would continue to paint for over sixty years after the Pastoral Concert was completed).  The canvas itself was not cleaned for many years, and so in photographs it will come across as having a yellowish tint.  However, when the painting was completed in the early sixteenth century, the colors most likely were much more vibrant and distinct. 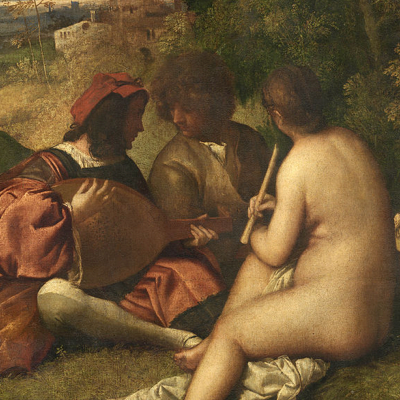 No one knows for sure exactly what is portrayed in the mysterious subject matter, but it appears to be a depiction of allegory.  The main figures are two men who are seated on the grass against a vast countryside setting.  Titian was really only interested in landscapes like this early in his career, and in later paintings he reduced the amount of visible landscape, or got rid of it altogether.  In the setting here, the man on the left is dressed in the red clothing worn by nobles of the period and seems to be playing a lute, and the man on the right wears a simpler brown costume more typical of peasantry.  Off in the distance, we see another man entering the picture; a shepherd arrives from the right along with his herd.

The men are turned toward each other as they engage in conversation and seem oblivious to the other conspicuous figures in the scene – two plump, nude women.  While the one on the left is in the process of pouring water from a glass pitcher into a well, the one of the right has just paused her activity of playing a flute while sitting right in front of the men.  The fact that the females are not noticed, and are rather comfortable in their lack of clothing, suggests that they are no ordinary women but instead supernatural persons.  The use of these kinds of figures – whether they be specific deities or general personifications of ideas or places – originated in the classical world and was commonplace in ancient Roman art.  Here, the immortal females seem to be present yet invisible in the presence of the men at the particular moment being portrayed. 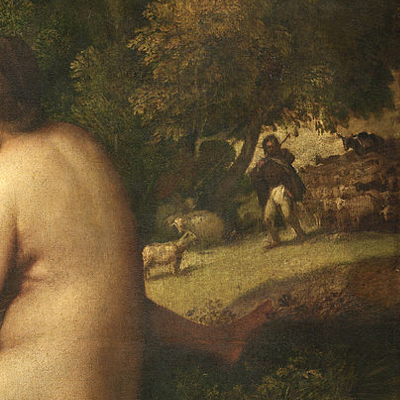 The bodies of the females may be considered overly plump by modern-day conceptions of ideal body form, but they would have been considered ideal for Titian’s time.  Titian may have copied them from actual models, or perhaps from classical statues, and he seems to have emphasized their curvy bodies by using curvy forms in the billowing trees and hills in the landscape.  He also painted the females so that the viewer not only sees one from the front, but also from the back.  The viewer therefore gets a glimpse of the nude female form from different perspectives, rather than just from the front.  This was a new contribution to painting by Titian, as he was the first painter to depict a nude figure from her backside in such a prominent manner.

Taken the figures and setting as a whole, what might the scene depict?  Because there is no written evidence which provides a basis for its content, and because the painting seems to have been an original idea and did not directly copy another painting, the overall meaning is not entirely clear.  However, one interpretation given to the female figures is that they are muses, the divine figures who inspire mortals, and the instruments that are being played allude to poetry.  The music that is by the figures creates a type of harmony in this setting that echoes the larger harmony found in the universe, thereby linking the activiteis in this scene to the cosmos.  This interpretation, however, is complicated by the arrival of the shepherd off in the distance, which interrupts the harmony of the music.  It may be the case that the shepherd symbolizes the person of lesser learning or class, who is unable to appreciate the sophistication of the music enjoyed by the two main figures.  Thus, according to this view, the Pastoral Concert provides not only a glimpse into a peaceful, utopian activity incorporating a classical understanding, but also perhaps a lesson on the means by which one may arrive at this world – through scholarship and understanding, something which the uneducated man does not possess.